This cashew kernel classifying machine belongs to the final stage of the cashew nut processing machine. After sorting, sellers could package cashew by different standards and sell them. This machine also includes three size grades. For the whole operation is automatic, you can easily learn to use the machine.

The cashew kernel size sorter is independently developed by Zhengzhou Shuliy Machinery Co., Ltd. It is specially designed for grading peeled cashew kernels. And the machine usually includes 3 grades, which could be tailor-made according to the requirements of customers.

The grader includes a hopper, three layers of rollers, and outlets. With high output and less damage to the shape, this size sorter could be a perfect choice for plants in the processing line.

The cashew kernel grader is mainly used for classifying cashew kernels. And the size of cashew kernels is uneven, it is generally divided into three grades. Or customers could choose their sizes.

From the picture, we can see the machine consists of three layers of rollers. Customers can adjust the gap between rollers and get the grade size that they want.

The cashew kernel grader operation is simple, and one person can complete the operation.

Reasonable design and exquisite structure reduce damage to the kernel in sorting.

This machine has a large output, less noise, and a one-year warranty. And it is also energy-saving.

This cashew kernel classifying machine is similar to the raw cashew grading machine. They are both designed for sorting cashew nuts. But they are used in different stages of the processing line. And they process different cashew nuts. Customers could choose according to their production needs to achieve the best effects.

How is cashew graded?

This machine comprises a rack, several grading rollers and a feeding hopper.…

Cashew, as one of the four most famous dried nuts,…

As people’s increasing concern for health, the consumption of nuts…

Before cashew processing, we should make sure that all the…

Do you notice that cashew nuts we see on the…

In developing countries like Vietnam and India, work of shelling… 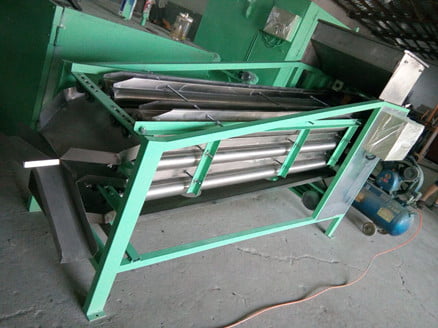 How is cashew graded?

Before packaging and selling cashew nuts on the market, we…